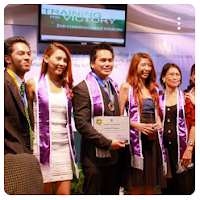 A couple of months ago, I started attending this workshop/training for leaders at Victory CDO. It's called Training for Victory (T4V), and it was a once-a-week engagement for about 10 weeks; although it took longer than that because of several holidays around that time. We graduated and were commissioned, not as pastors, but as servants who will lead people to take on a personal relationship with Christ. By God's grace, I was also the recipient of the Award for Excellence during the ceremonies.

All of the learnings I gained during the training has greatly guided me in my walk with Jesus Christ today. You see, I've constantly struggled with finding time for prayer, or for studying His Word. I've always had some reason or excuse to do these at a later time. Eventually, I'd end up not doing them anymore because work after all, takes a big chunk off my day; and I have to spend the rest of the day for family and for resting.

But the Tuesday sessions brought back a discipline of study that I thought I've lost. I've realized that just like with office work, or with project "sprints", I can also discipline myself to do 10-15 minutes of focused time for prayer, meditation, or Bible study.

I've greatly benefited from this. Not only have I deepened my relationship with Christ, but I have also begun to see and feel a change in myself, in how I perceive prayer and what it can do for me and my family, and in how I should conduct myself, whether I'm in the company of others or family. There is no secret formula for this. If you want to deepen your relationship with God and live a life of victory, let me know. I'd be more than happy to talk about this with you (over coffee perhaps?).

Popular posts from this blog

April 04, 2021
March was a good month. Not just because it's my birthday month, but I've been able to do more physical exercises as far as I'm allowed, and I've also been able to get through my first month back in the job. For the first couple of weeks, I thought I was going to do 4 hours a day at most, and turn up the heat bit by bit until I'm able to do 100% again. But I suppose having to rest over a month does have its toll. It took significant effort to try not go all in with guns blazing on the first day back at work. LOL Anyway, I'm trying something new this year. We've migrated our applications to a better platform, and we'd like to push that to the cloud this year. It'll obviously need a lot of liaising and cooperative work with other teams and domains so I'm going to do more engagement and solutioning than the usual engineering this time. Last week, we did a platform-related hackathon and a critical refresh across clusters. There's going to be a lo
Post a Comment
Read more

Being a Systems Administrator @37signals (Podcast)

June 03, 2010
I use Basecamp a lot. Kudos to these guys for making my job as a Systems Administrator more bearable than usual. :p Episode #12: Being a Systems Administrator at 37signals Time: 22:50 | 04/13/2010 |  Download MP3  |  Link to this episode Mark, Joshua, and John on life as a 37signals Sys Admin The Sys Admin team discusses hosting the 37signals apps, working with programmers, helping support, telecommuting, dealing with vendors, improving speeds in Europe, and more. Related links: Rackspace Dell Definitions: Redundancy Facebook Just Gets It Right via  37signals.com
Post a Comment
Read more

It's no longer about the number of monitors you have

December 16, 2014
Unlike in the late 90s to mid 2000s, desktop real estate is no longer constrained by the number of monitors you use. We now tout the number of virtual machines we have access to. In fact, my ailing MBP has managed to remain useful because remote access still enables me to work on all our VMs. Our applications and storage servers are all virtualized. Even some legacy systems have been replicated on VMs, allowing us to retire old and bulky server hardware.
Post a Comment
Read more